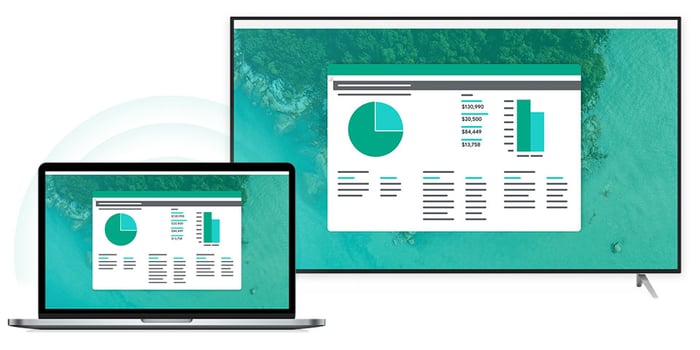 Screen mirroring technology allows you to wirelessly share a device screen to another display in the same space in real time. Screen mirroring requires both a screen-sending device and a screen-receiving device (often called a receiver or media player).

Screen-sending device: This is the device you are mirroring from (the device you want to share to another display). This device can be a phone, tablet or computer. These devices use a proprietary wireless communication protocol like AirPlay, Miracast, Google Cast or other purpose-built screen mirroring software to share content to other devices. You can screen mirror from iPhones, iPads, Android phones and tablets, Chromebooks, Windows PCs, Macs and more.

Selecting the right screen mirroring solution can be a confusing, time-consuming process. Read the 9 Things You Must Know Before Picking a Screen Mirroring Solution to make the best decision. 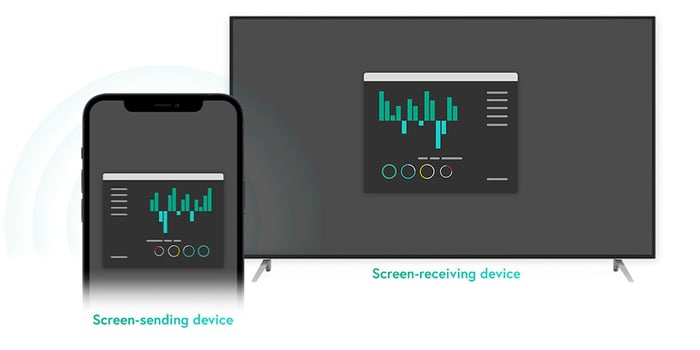 It’s possible to use cables or wired setups like HDMI to share your screen to another display. However, wired screen sharing is an outdated, problematic and costly solution. For the purposes of this guide, screen mirroring is an entirely wireless act.

Read 7 reasons you should look for wireless alternatives to HDMI cables. 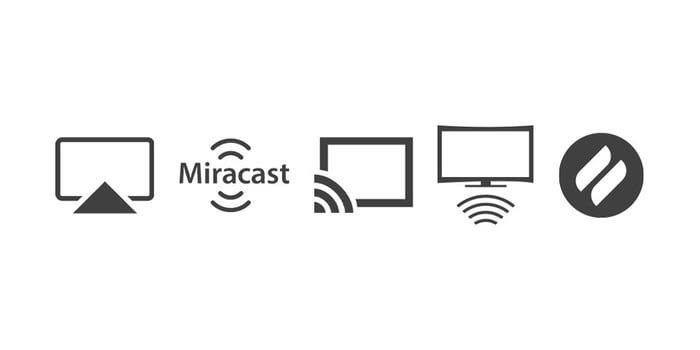 Discover the 9 best ways to evaluate any screen mirroring tech

The good news: Some of these protocols like AirPlay, Google Cast and Miracast come built-in with most of the devices you already have. This means quick and easy screen mirroring to compatible devices.

The bad news: These protocols are only compatible with devices that use the same protocol. That means you can't, for instance, screen mirror an iPhone to a Windows PC or a Windows Surface Pro to an Apple TV without a third-party screen mirroring solution. They also tend to create a number of problems on your network (detailed in the sections below).

When to Use AirPlay, Google Cast, Smart View, Miracast and SSP (Ditto)

It can be confusing to figure out when to use these protocols or when to search for an alternative. We break down when to use each screen mirroring protocol below:

Bonus: There are 9 things you must know before picking a screen mirroring solution. Find them here.

When to use AirPlay

Most Apple devices come equipped with AirPlay. iPhones, iPads, Macs, HomePods and Apple TV all use AirPlay to wirelessly send and receive content. 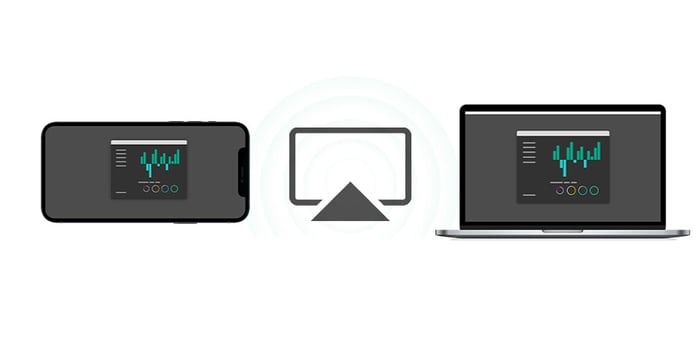 If you only own Apple devices, you can probably stick with using AirPlay to screen mirror. Here’s what you can screen mirror and stream with AirPlay:

*AirPlay mirroring iPhone/iPad to Mac is limited to certain devices and only on macOS Monterey and macOS Ventura.

The problem: Non-Apple devices are not equipped with AirPlay. As mentioned above, people with other device types will not be able to share content wirelessly using AirPlay. Additionally, AirPlay isn’t ideal if you have a complex or secured network like most schools and businesses. AirPlay requires Bonjour and multicast traffic to be allowed on your network.

AirPlay is also limiting when you have separate networks. If you have employees on one network and guests on another, or students and teachers on separate networks, they wont be able to share. The sending and receiving devices must be on the same network. Additionally, AirPlay doesn't provide advanced customization options that allow you to determine how and what you mirror. Other screen mirroring products like Ditto help resolve these issues.

Learn how to screen mirror via AirPlay

When to use Google Cast

Google Cast is the built-in screen mirroring protocol common on Google devices, Android and Chrome operating systems, and some Google apps. Chromecast built-in is the Google streaming protocol for many smart TVs and media players. 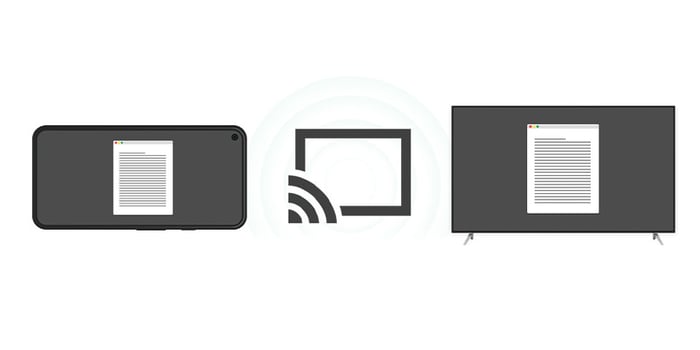 Here’s what you can screen mirror and stream with Google Cast:

If you require security features, look for an alternative to Google Cast. The built-in protocol doesn’t offer vital security features for schools and businesses and connections can’t cross VLANS.

Learn how to screen mirror via Google Cast

When to use Smart View

Smart View is Samsung’s version of Google Cast. Smart View is an app for your Samsung phone, tablet or laptop that lets you screen mirror to other Samsung devices. 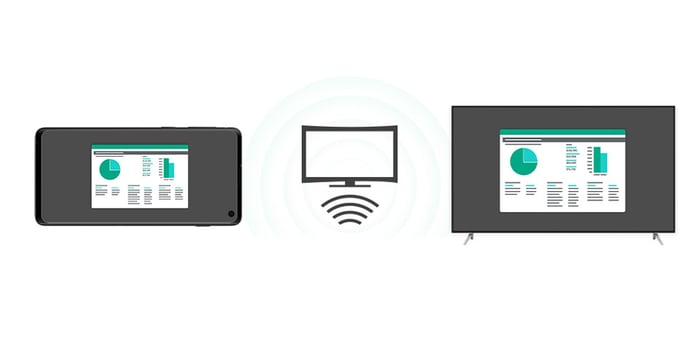 Use Smart View if you want to mirror your Samsung mobile device or laptop to a Samsung TV or other Samsung display. Do not use Samsung Smart View if you need compatibility with a wider range of devices or if you need a screen mirroring solution that's secure and scalable for heavy usage in places like schools and businesses.

Learn how to screen mirror via Samsung Smart View

When to use Miracast

Miracast is available on some Windows and Android devices. Use Miracast when you want to screen mirror an Android or Windows device to a Miracast-enabled TV or other display. 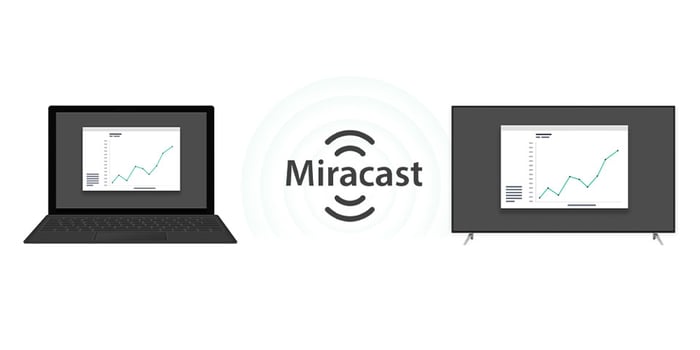 While this is an acceptable option for home use, Miracast is not suitable for large organizations due to poor security measures and compatibility limitations.

When to use a non-native screen mirroring solution like Ditto

If you want more robust features, need greater screen mirroring compatibility, require a network-friendly alternative or want a scalable solution, there are third-party screen mirroring options for you.

Ditto is a screen mirroring software solution that works on common hardware receivers like Apple TV and Windows devices. The Ditto screen mirroring protocol, called SSP, is compatible with a wide range of device types, offers security features and is centrally managed for administrator convenience. For more information on Ditto and other purpose-built screen mirroring solutions, see Screen Mirroring Products.

There are many different options when it comes to picking a screen mirroring solution. Your devices, budget, desired features and intended use will determine what solution is best for you.

These solutions are more scalable options than native protocols and come with additional capabilities, features and security settings. These options are specifically designed for large-scale environments and are compatible with many device types to maximize collaboration and accommodate different setups.

Ditto: Ditto is an all-in-one screen mirroring solution. It encompasses the capabilities of AirPlay, Google Cast, Miracast and Smart View and is compatible with virtually every widely used operating system. This solution is ideal for schools, businesses and other large organizations that want reliable, scalable and affordable enterprise-level screen mirroring. Ditto also offers the option to display digital signage on your screens. Try Ditto free today.

Reflector: Reflector turns your Mac or Windows device into a screen mirroring receiver. This mirroring and streaming solution has a number of great features, including mirrored device recording, device frames, display options and more. Compare Ditto and Reflector.

AirParrot: AirParrot is a computer app that allows you to screen mirror your Windows and macOS screens to AirPlay and Google Cast receivers, like Apple TV, Chromecast or Reflector. Compare Ditto and AirParrot.

Kramer VIA GO2: Kramer VIA GO2 is a wireless screen mirroring hardware solution. It’s a proprietary hardware box that is connected via cables to an organization’s network and primary displays such as TVs. Compare Ditto and Kramer VIA GO2.

Do you know the 9 things you must consider before deciding on a screen mirroring solution for your school or business? You should. Learn here.

How do you screen mirror to more than one display simultaneously? 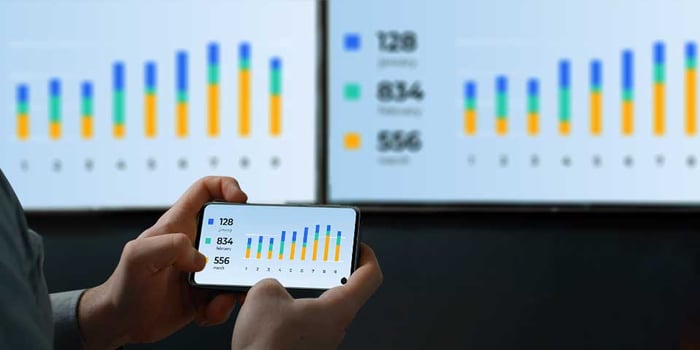 How do you screen mirror multiple devices to one display simultaneously? 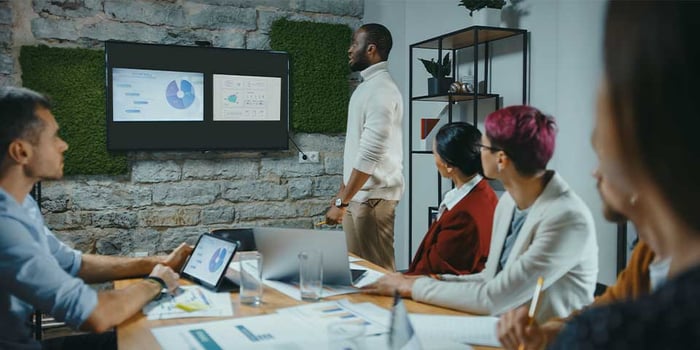 It’s also possible to screen mirror multiple phones, tablets and computers to one display. This is useful when you want to compare notes or deliverables, collaborate on a project, showcase multiple projects at once and much more.

Learn how to screen mirror multiple devices to one Apple TV.

How do you use screen mirroring to replace your document camera? 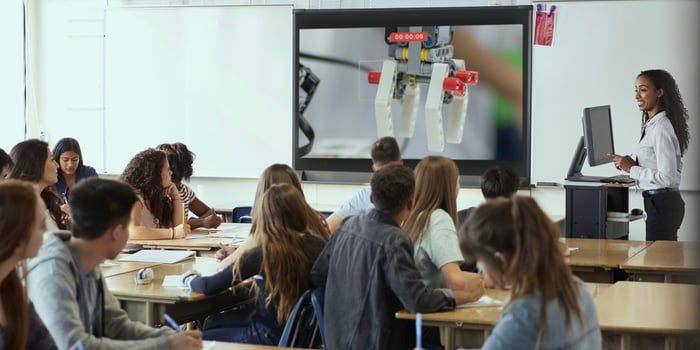 If you want a cost-effective and wireless document camera setup, consider utilizing screen mirroring. Simply set up your phone or tablet to record your teaching materials, then screen mirror to the display in your space. Need a reliable screen mirroring solution for your classroom? Try Ditto.

Replace your document camera with this complete guide.

Is there such a thing as screen mirroring etiquette? 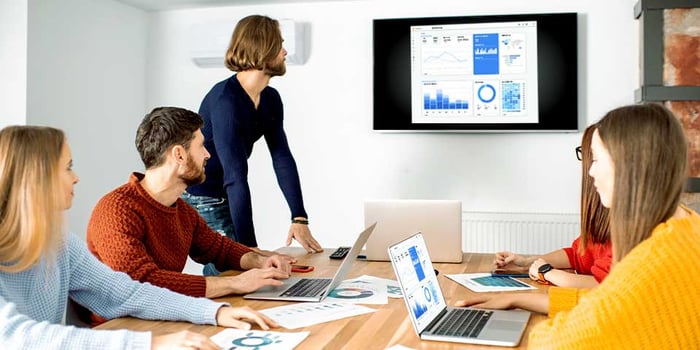 Absolutely. Before you share your screen to a conference room full of your colleagues, make sure you know proper screen mirroring etiquette. That way, you can avoid common screen mirroring faux pas and make your wireless content-sharing experience more enjoyable for everyone.

How do you turn off notifications when screen mirroring?

Whether you’re giving a presentation or sharing your screen during a live stream, you should turn off notifications to protect your privacy. Hide unexpected messages and block disruptive phone calls so you can share your screen worry-free.

Learn how to turn off notifications for iPhone, iPad, Mac, Windows, Chromebook and Android phones and tablets.

Discover the 9 things you must know before picking a screen mirroring solution for your school or business. 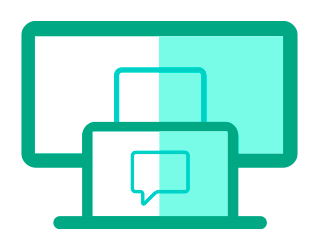 This article will teach you what screen mirroring is, what it isn't and how to use it. Read more.

What is digital signage?

Learn the basics of digital signage and tips to help you make the most of your displays. Read more.

The 9 best ways to evaluate any screen mirroring solution

Make sure any screen mirroring technology passes this test before investing your time and money.