The College of Charleston needed technology that would allow faculty and students to wirelessly display content from both Windows and Apple devices. Wireless Engineering Manager Jason Trinklein tested a number of AirPlay and Cast receivers. The receivers were expensive, and tests produced poor screen refresh rates, pixelation issues and audiovisual synchronization problems. Trinklein then tested the Ditto screen-mirroring software and discovered it was the best technology for the College of Charleston.

About the College of Charleston »

The College of Charleston is a nationally recognized public liberal arts and sciences university in Charleston, South Carolina, with more than 10,000 students and 500 educators.

Wireless Engineering Manager Jason Trinklein needed a solution that would allow users to wirelessly present content from the wide range of devices used on campus. Since Apple devices account for 90% of the school network, the Apple TV was a logical solution. However, Apple TV is not compatible with Windows devices. Windows users on campus would be left without a way to present. Trinklein began researching proprietary hardware and software receivers to fill the gap.

The College of Charleston Information Technology Division evaluated a number of receivers and were met with unsatisfactory results.

“Most proprietary receivers are expensive, and they have poor screen refresh rates, pixelation, non-native resolution to the display, time-latency issues and audiovisual synchronization problems,” Trinklein said.

In addition to poor quality, the proprietary hardware receivers were incompatible with an essential presentation component: video mirroring for iOS devices.

“When you play content that an iOS device associates with an Apple TV app, such as YouTube, the iOS device sends a command to the Apple TV to load the YouTube app and play that content locally on the Apple TV,” Trinklein said. “Similarly, the iOS device expects the proprietary receivers to do the same thing, but the receivers can’t because they don’t have those apps installed. Professors would not be able to stream content from YouTube, Netflix or Hulu to show their students. Those multimedia elements simply can’t be displayed.”

Quality and price eliminated the tested hardware receivers from contention. The Apple TV was nearly ideal, but Windows incompatibility made it an incomplete campus-wide solution. Trinklein then discovered a screen-mirroring software called Ditto that complemented Apple TV by enabling Windows device mirroring.

The College of Charleston Goes Wireless with Ditto

Trinklein tested the cloud-based Ditto screen-mirroring software on campus and found that the quality, device compatibility and price of Ditto aligned with the College of Charleston’s wireless presentation goals.

Ditto allows faculty and students using both Windows and Apple devices to walk into a classroom and quickly display their device onto the Apple TV simply by entering the Ditto room code into the web-based Ditto connect page.

“What’s remarkable is that using Ditto to connect devices to the Apple TVs is better than any of the other solutions were even with their own native apps,” Trinklein said. "A lot of systems require administrative access to install proprietary software, but Ditto is a ‘dissolvable client’ that doesn’t install or need special privileges.”

“What’s remarkable is that using Ditto to connect devices to the Apple TVs is better than any of the other solutions were even with their own native apps.”

The College of Charleston will deploy more than 60 Apple TVs across campus classrooms. Each one will have an associated Ditto subscription.

“In the coming years, we expect hundreds of Apple TVs to be installed campus-wide with Ditto licenses,” Trinklein said. 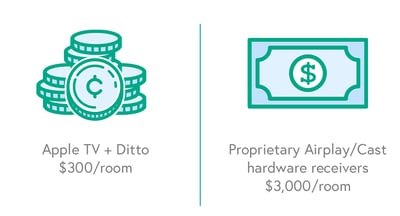 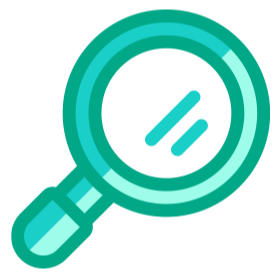 Want to chat with our screen-mirroring and device-presentation experts?