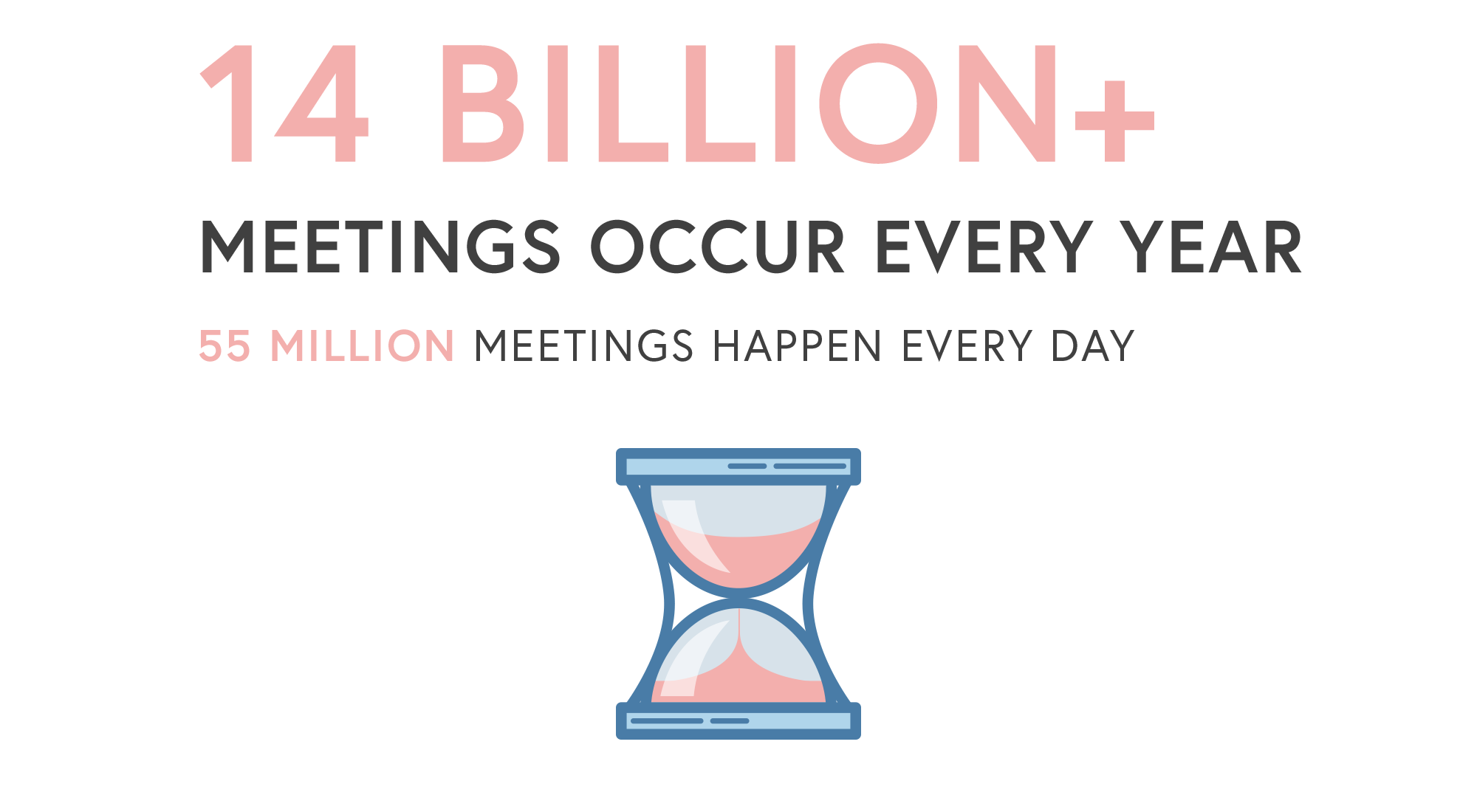 Let’s play a quick game of Would You Rather.

Would you rather set a pile of your own money ablaze or watch your employees’ souls slowly slip out of their bodies?

With meetings, you can do both.

Anyone who has ever worked anywhere knows what we’re talking about.

Recent estimates put the number of meetings in America at about 14 billion annually.

For the math lovers, that’s:

Two-thirds of all meetings are unnecessary. Regardless of industry, company or culture, meeting productivity is a problem.

Bad meetings hurt the bottom line. Unproductive meetings in the U.S. alone cost 399 billion dollars per year. To put that in perspective, that’s enough money to launch a space shuttle into orbit 886 times.

It’s not just America. Bad meetings are a global challenge: Forty percent of professionals in the U.K. report poorly organized meetings as the largest cost to their business. 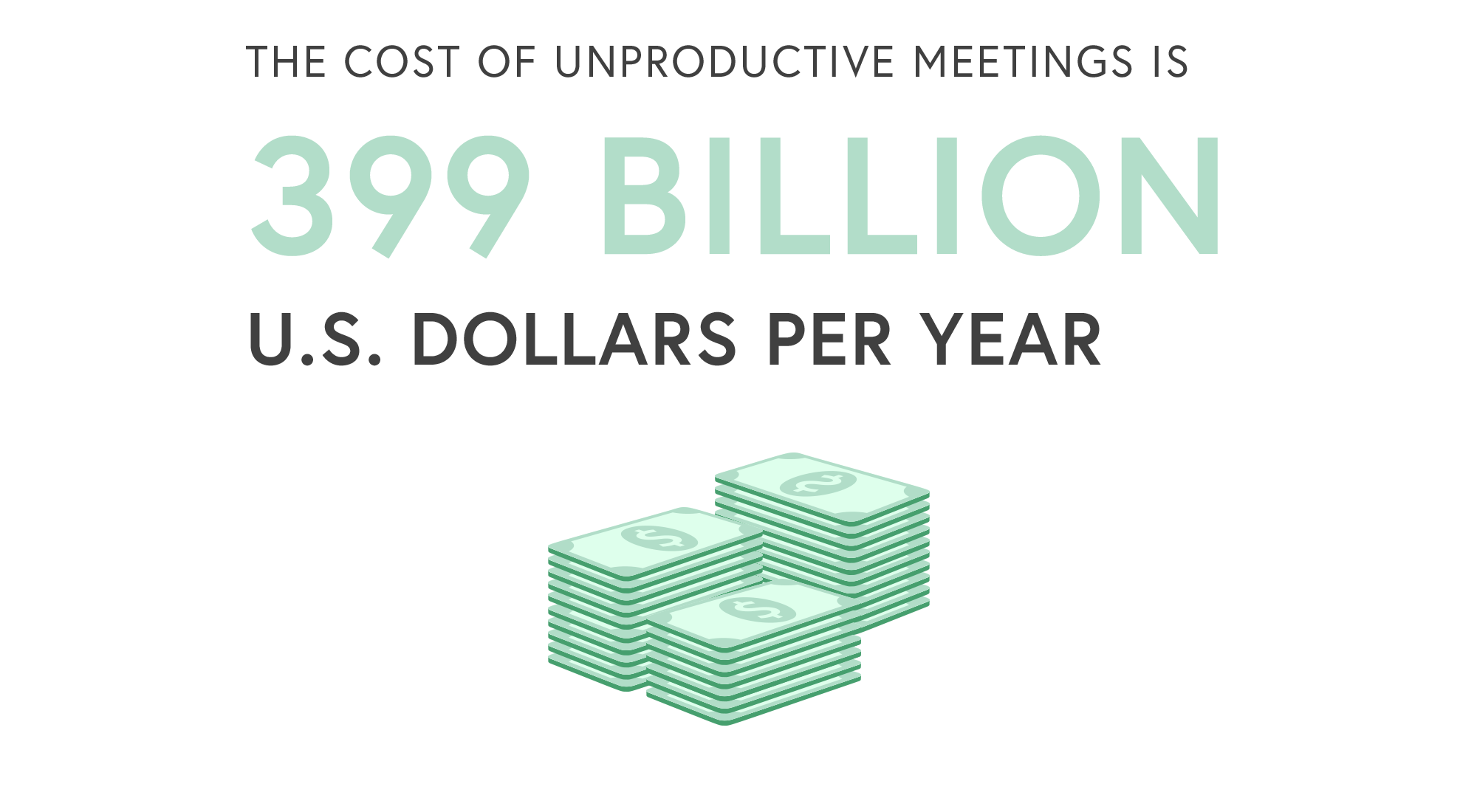 So what’s wrong with meetings?

Many things can derail a meeting:

That’s not all. One problem in particular is to blame for unproductive meetings: bad technology.

Technology derails meetings far too often. Money is lost, time is wasted and the hidden costs of tech failures pile up.

The hidden cost of tech problems

Eighty-nine percent of professionals think technology will make meetings easier. In reality, technology problems are the largest contributor to low engagement in meetings each year.

Aside from burning through employee salaries, there are other unexpected ways companies lose money when tech problems occur in meetings.

Twelve percent of people report their company lost business because of a meeting room technology failure. Over a quarter of companies have damaged client relationships with unproductive meetings.

Not only do people waste time in meetings, they waste time preparing for those meetings. Most people now assume technology will fail during a meeting in some way. Two-thirds of people take time out of their work day for a tech rehearsal to ensure their presentation tech won’t fail. Others print handouts and consult the IT department beforehand, draining tech support’s time and resources.

Nearly one-fifth of people miss important deadlines because of a technology failure in a meeting, and 10% claim to have missed out on personal opportunities such as promotions.

Nearly 90% of people experience elevated stress levels when dealing with troublesome technology in meetings. The most stressful experience is attempting to get information on a large screen for the audience to see. The second most stressful experience is figuring out which cables and adapters can connect a device to a display. Technology-related stress frequently contributes to decreased productivity and collaboration, which in turn increases confusion, miscommunication and turnaround time. 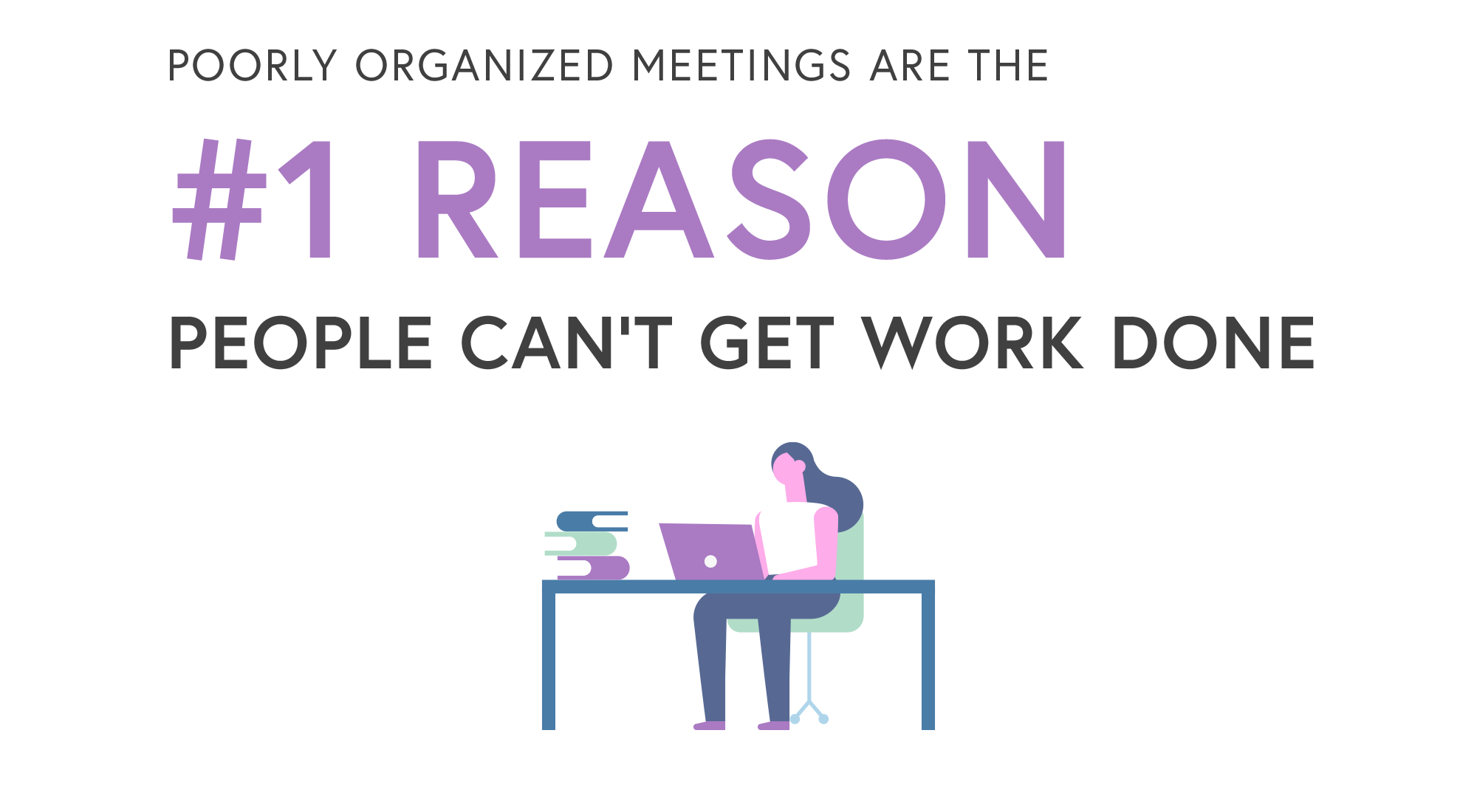 While professionals expect technology to make meetings easier, all we have to do is look at the state of conference room presentations to see that’s not always the case.

Screen mirroring technology is a necessity for modern workers and modern meeting rooms. The largest population of workers in the U.S. — millennials — agree. Millennials expect meeting rooms to include a seamless integration of fast and stable wifi, updated technology and access to mixed forms of content. This includes the ability to wirelessly present and share content from any device.

Stats show that only 41% of public meeting rooms include screen sharing technology.

What’s more, 50% of managers want “collaboration solutions” that make it easy to share visuals and other information from different devices. Companies fall behind when they fail to see devices need to be personalized and connect wirelessly. Research shows more people are using their own devices for work and connecting to conference room displays:

The problem can be fixed by adopting technology that works for people, not against them. This won’t solve all of America’s meeting woes, but it’s a good start.

“When technology works correctly and multimedia is used within a presentation, nearly three quarters [of professionals] are more engaged,” according to Barco.

The workforce has spoken. People want tech that makes meetings easier, productive and more effective. There are a few ways to accomplish that.

1. Look for tech that engages

Technology is the key to successful productivity. It must be used effectively if it’s going to streamline work (or even recoup its cost). Remember: Two-thirds of all meetings are a waste of time. If technology is a leading cause, the solution is simple…

2. Look for tech that works

It’s embarrassing and demoralizing when technology doesn’t work as a user expects. Technology should work when and where a user needs it, every time.

One tool that companies use to engage their workforce and eliminate unproductive meetings is Ditto. Ditto is wireless presentation solution that allows anyone to screen mirror and present without cables, adapters or dongles. It’s cross-platform so employees never have to worry about which devices and displays they can or can’t mirror to.

Read more about how companies reduce downtime during meetings with Ditto.

Find simple technology that anyone can use, from the tech novice to the tech expert.

Complicated setups and a rat’s nest of cables only add to employee stress and wasted time. Using tools with low barriers to adoption will drastically increase their benefit to your bottom line. 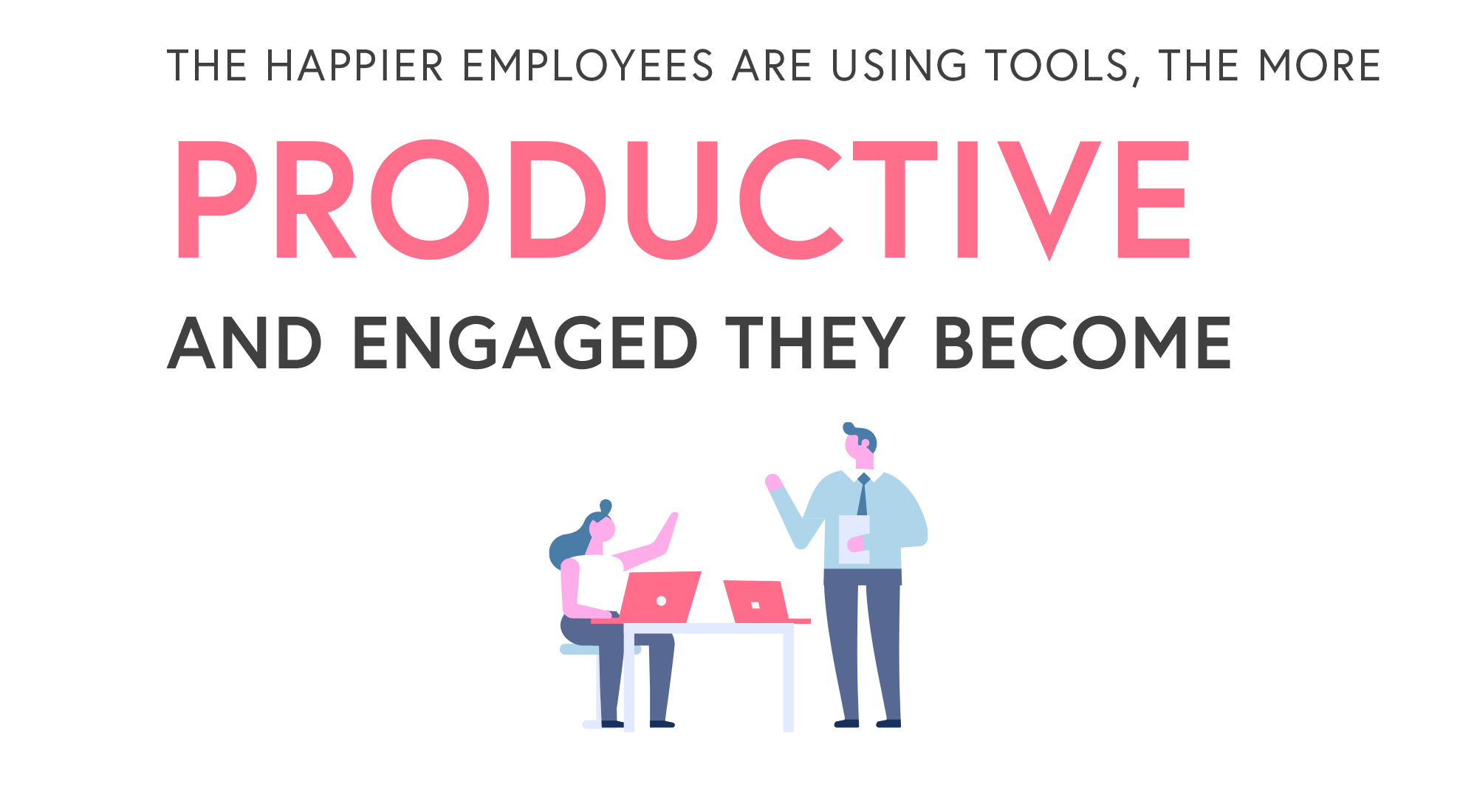 The key to productive meetings

Fundamentally, technology in business meetings should help people collaborate. Most importantly, your technology should just work.

Identify technology that is scalable, simple and easy to use. Your tools and methods should omit stress and wasted time. To truly transform unproductive meetings into conversations that engage and produce results, technology should adapt and respond to the ways your company grows.

See our infographic — The Real Cost of Unproductive Meetings — for a quick and easily shareable recap of the data in this article.

*Numbers were calculated based on 260 working days/year and 12 working hours/day across the U.S.

No matter how many meetings you attend, Ditto makes them more productive. Wirelessly. 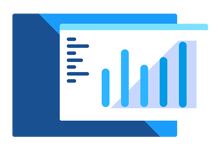 See how a phone, tablet or computer can wirelessly appear on other devices.
Learn everything you need to know. 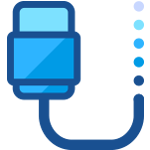 Want to chat with our screen-mirroring experts?